Water hardness is a factor that needs to be considered when spraying, especially when it comes to glyphosate.

The high amount of dissolved calcium and magnesium in hard water will tie up weak acid salts such as glyphosate, making it ineffective at killing weeds, and potentially increasing the risk of weeds developing herbicide resistance, explains Kim Brown-Livingston, weed specialist with Manitoba Agriculture in this Soybean School episode.

The impact water hardness can have on glyphosate effectiveness was clearly demonstrated in side-by-side soybean plots as part of the Manitoba Crop Diagnostic School at Carman, MB earlier this month.

Fixing a problem with water hardness can be as simple as adding ammonium sulfate (AMS) to the tank before adding glyphosate, as the AMS will tie up the cations in the water, Brown-Livingston notes. Decreasing water volume and increasing herbicide rate can also offset water hardness issues.

Check out the video below for more on spray water quality, water hardness, suspended solids, and other common water-related issues that can affect herbicide efficacy with Kim Brown-Livingston (continue reading below):

While water from the same source usually won’t vary much from year to year, problems are more likely to arise when sprayer tanks are being filled from alternative sources, which often happens in drought situations. There have also been some anecdotal reports in southern Manitoba this year of hardness levels rising in water from usual river sources as the region has moved out of drought.

Brown-Livingston suggests getting a water test done once a year, just to make sure there aren’t any surprises. “With high priced herbicides and pesticide shortages — you might not be able to get all the pesticides you need when you want, so whatever you’ve got has got to work perfectly.” 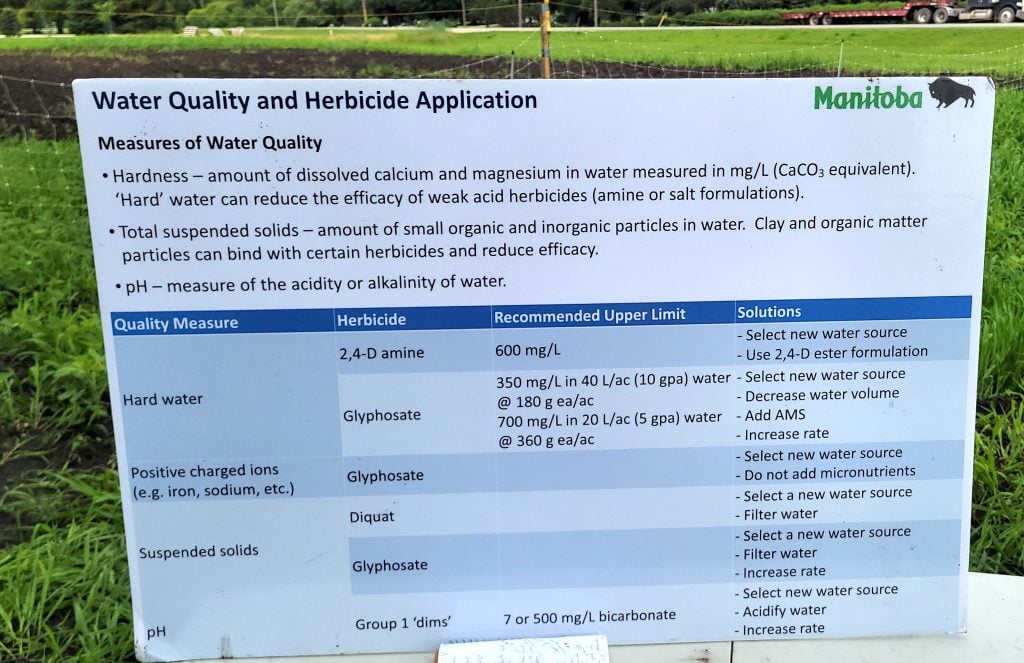 When it comes to test results, 350 mg/L calcium carbonate equivalent is considered to be the upper limit for water hardness when spraying a 180g ea/ac glyphosate formulation at 40 L/ac. If using a lower water volume of 20 L/ac and a higher concentrated 360 g ea/ac glyphosate formulation, a water hardness reading of 700 mg/L of calcium carbonate equivalent is considered the upper recommended limit.

“If you’re over 700, then you either need to fix that water with ammonium sulfate or you really should be looking for a different water source,” she says.

In addition to glyphosate, 2,4-D amines are also affected by water hardness, with 600 mg/L on a water test result considered to be the upper limit.

Soybean School: Getting ahead when you’re behind on in-crop weed control

Wheat School: Not all bushels are the same

The bushel is a critical unit in grain farming. It's used to describe volume in many contexts, including a crop's yield per acre, the amount of grain that fits in a truck or bin, and as a fundamental piece of information in grain sales contracts. But not all bushels are the same. More specifically, a…