The faster hay bales can be picked off a field, the less damage wheel traffic does to re-growing plants. Bale collection can be time consuming too, and when time is of the essence, making the job faster or less labour intensive is a real bonus.

One concept — an autonomous bale picker —has been nicknamed the “Bale Hawk,” and Vermeer says that it will travel around a field via onboard sensors to locate bales, pick them up, and move them to a predetermined location. 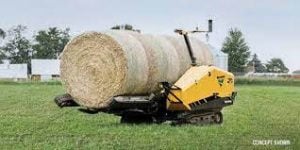 “This machine helps save labour time and associated costs, by eliminating the manual step of moving bales,” says Kent Thompson, Vermeer’s research and development manager. “The autonomous bale mover senses where it is relative to a bale, allowing it to plan a route to pick up that bale. Today, it can pick up three bales at a time before delivering and unloading them to a predetermined location.”

In your down time, you can play farming — to win money

Carbon tax on grain drying fuel not “significant” enough to qualify for an exemption, Bibeau says