History would suggest that Canadian elections are won and lost in Quebec and Ontario. Although that may be true, recently we’ve seen a shift across the country. As the population growth shifts west and the balance of power moves from downtown to the suburbs, how will Canada’s political climate shift? How will agriculture, natural resources, and infrastructure influence shift with it?

Darrell Bricker, author of Empty Planet, The Big Shift, and now his latest book, Next, explores the changing demographics of Canada and what it means to advertise trends, food trends, employment and infrastructure, and, especially, the impact all of this has on political power.

In the audio below in an interview for RealAg Radio, Bricker joins host Shaun Haney for a fulsome discussion on not just what trends are of the Canadian demographic landscape, but which groups are being largely ignored by policymakers and advertisers alike — and just who that is may surprise you.

Bricker says that this long-held belief that Canada is English, French, and Indigenous, has shifted. A fifth of our population was not born here. The median age of Canadians is 41 (that’s not young, he says), and where there are young people and new babies is not the east coast or Quebec and Ontario, it’s the Prairie provinces.

What that means, is that the power of the so-called Laurentian Elite — a group of white, male Canadians living in downtown Toronto, Montreal, and Ottawa — have been displaced by suburbanites near major cities and the Prairies, plus women over the age of 45. But the shift is subtle, so far, and we are only beginning to see the evidence of this demographic shift at the polls. 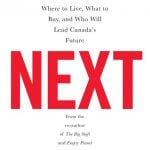 For example, the old formula for winning federal elections was either win enough of Quebec and a bit of Ontario, or all of Ontario and enough of Quebec, and you’d be Prime Minister. Stephen Harper won because he won the west and suburban Ontario (more on that in a minute). During the last election, Western Canada held the Liberals to a minority government. So while the west is not yet deciding elections, as the House of Commons seats get added in B.C. and the Prairies, the political importance of Western Canada increases.

What does this mean for agriculture? Bricker says that if you want to influence governments going forward, you’ve got to connect with suburban Canada. These are largely private-sector taxpayers. They commute to work. Statistically, more of them are new Canadians than say more urban dwellers. What do you have to say to them?

Listen on for more from Bricker, including a discussion on how women over 45 are being ignored by policy and advertising, how Millennial men are being left behind by health and employment policy, and how all of this ties into how agriculture positions itself moving forward.

R-Calf Sits Down With the Obama-Biden Transition Team

St. Lawrence Seaway shipping season off to a strong start