Day one of Agritechnica featured a big reveal for the show. With test machines ready to hit the field in the fall of 2020, John Deere unveiled its X series combine. The X series a twin rotor machine that pits this green machine against others in the market. There definitely was much hype about John Deere’s new combine with very cool pre-release sneak peak videos that were not short on budget.

When we visited the John Deere combine area were were warned that the company was not going to release any specifications on the product because this was just the unveiling.  The company did release the following description after winning a silver medal in innovation at Agritechnica: 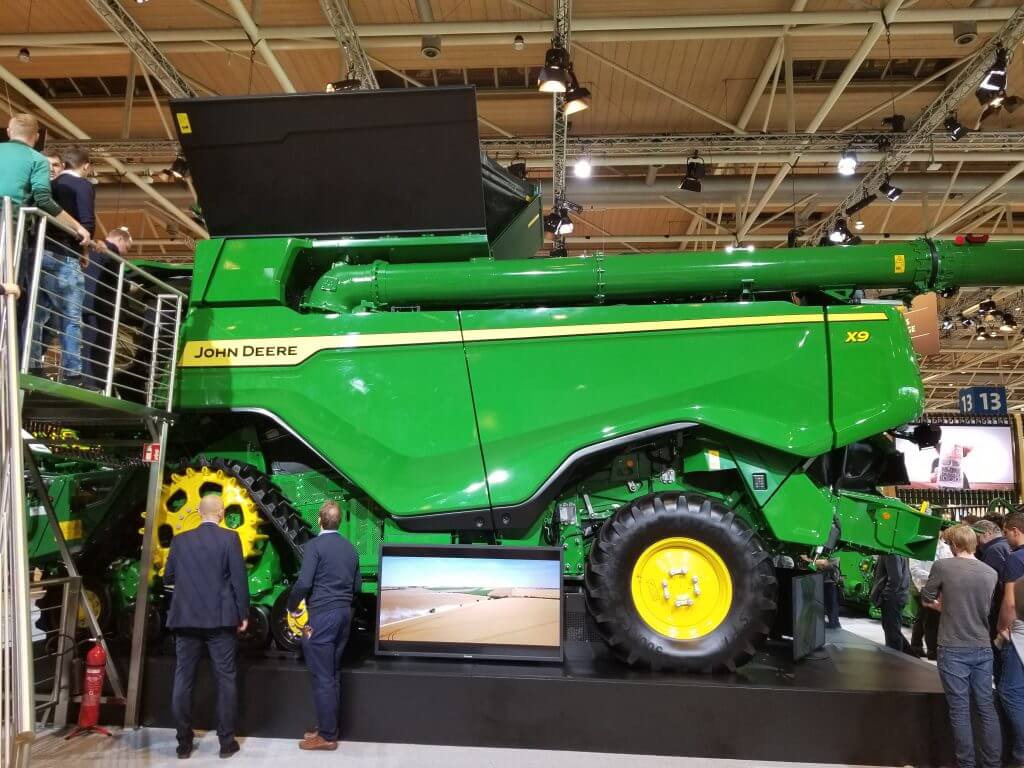 When developing its new dual-axial rotor combine harvester, John Deere has not only revised the assemblies for threshing and separating, but also all other performance-determining assemblies while taking maximum efficiency into account. The goal of the design was to obtain maximum performance stability, with unaltered machine settings wherever possible, under difficult harvesting conditions. This begins with an identical pivot point of inclined conveyors and feed drums in order to always keep the feed angle identical relative to the rotors. This also includes a completely new, slim, belt-based drive concept that enables a transport width of 3.5 m to be adhered to with a current maximum duct width dimension of 1.72 m and 710 mm front tyres. The dual-axial rotor threshing and separating concept was designed for maximum straw throughput and performance stability values. Especially during cleaning, great importance was placed on the discharge of large air volume flows, including via the straw distribution technology in order to minimize the air counter-pressure and maximize air separation. The optimization ends at the chopper by replacing the familiar angled blades with so-called “dented” blades with a golf ball air-flow effect for maximizing the air volume flow.

Matt Arnold, of John Deere, says in the below video, “this is the global revealing of John Deere’s twin rotor concept, and also is the widest body combine on the market with the dual rotor system.”

For John Deere fans, there was massive amounts of excitement, while other brand supporters were less than impressed, saying New Holland has had a twin rotor since the late 1970s.

John Deere says it will have demo machines out in the filed in the fall of 2020.

Find out more about the X9 twin rotor combine released at Agritechnica by watching the video interview with Matt Arnold of John Deere:

TechTour: Claas aims for the best of both tracks and wheels