Grain markets traded mostly lower this week as the complex dealt with thin volume on the shortened trading week, due to the U.S. Thanksgiving holiday. More broadly, grain markets are watching for any news on trade negotiations between the U.S. and China. Weather out of South America is usually a catalyst for this time of year but we’re not seeing many issues this year.

Remember that, at this time a year ago, canola and soybeans were starting to rally on South American planting concerns. This year though, soybean planting in Brazil is cruising at a record pace and the weather has been near perfect, which has led to AgroConsult recently suggesting that total soybean production could reach 129 MMT. This would align with their effort to keep shipping soybeans to China at a record pace. Next door, beans in Argentina are slowly but surely getting into the ground at an average pace.

What this all adds up to is canola prices drifting lower than in years past. Canola prices were relatively the same as where they ended last week, but the January 2019 contract did lose $.80/MT to close at $476.10, despite seeing some short-covering earlier in the week.

Ultimately, canola prices are looking for a demand function to jumpstart things again. While we did see a new crop-year-best of canola exports of nearly 400,000 MT in Week 15, cumulatively, things are still tracking a bit behind last year with 3.13 MMT now shipped out through Week 16 of the 2018/19 crop year. n the domestic side, we are tracking relatively in line with last year and the seasonal average, but the status quo is helping work through what is the second-largest crop in Canadian history. If the market can see some fresh demand headlines, that’s what will get canola prices excited again.

Soybean prices dropped a bit this week on the threat that a trade deal between China and the U.S. may not be found next week in Argentina at the G20 Summit. Most contracts lost about a dime for the week, with the futures market in Chicago closing at US$8.81/bu.

On that note, we know that because of the current trade war with China, and soybean prices artificially depressed due to tariffs, more American farmers are planting winter wheat this fall. Without a trade deal, they’ll also likely plant more spring winter when the weather turns in six months. Specifically, we’ve been hearing from producers in Minnesota, North Dakota, and Montana that spring wheat acres in the area could be up 10-15% as farmers in these states move away from planting soybeans and durum. For the latter, it’s pretty easy to do the math on durum ROI.

Oats prices had a big jump earlier in the week, but cash oats prices are expected to maintain their current levels through the winter months. There is some speculation, however, that supply could get tighter into next spring/summer, which would help cash prices higher.

However, despite supply dwindling by the end of the crop year, bullish sentiment will likely not be as prominent as seen in recent months. As a result, one should be conservative on the upside potential to oat prices, especially for new crop prices. As a result, an elevation in cash oat prices throughout the remainder of the crop year should push planted oat acreage higher in 2019/20.

Supporting this narrative is recent data from Eurostat, who revised EU oats production down to 7.77 MMT, or 280,000 MT or 3% lower than the USDA’s forecast in the November WASDE. If the latest forecast is believed, total EU oats production will be expected to fall 5.2% year-over-year. Driving the decline was Poland, down 20% year-over-year to 1.2 MMT, and Finland, down 14% on the year and to  868,600 MT. Also, oat production in Sweden, is down a significant 37% compared to 2017/18 at 424,000 MT. If observed, this will the lowest annual production since the EU began recording data as a whole bloc in 2000.

In other cereals, in the November WASDE, the USDA lowered Australian barley production to 7.4 MMT. This is still 500,000 MT higher than the current estimate from ABARES.

COFCO, the major Chinese food player, says that Australian barley owns about two-thirds of the Chinese market, accounting for about 4 MMT of China’s 6.5 MMT of total imports. However, these numbers are based on average Australian barley production of nearly 9 MMT. Considering this year’s barley harvest in the Land Down Undaa will be 2 – 2.5 MMT below this, can they export the same amount to China? Likely not! Further, China is currently launching an investigation into the pricing of Australian barley!

Currently, the USDA is forecasting Australian total barley exports at 5.7 MMT, but ABARES thinks it’ll be closer to 5 MMT. This is, in part, due to the fact that Western Australian barley buyers/exporters are making more money shipping it over to the eastern side of the country, where barley prices are at record levels, instead of to China and other southeast Asian markets. Canada seems poised to capture some of this demand gap, and we’re starting to see exports pick up. Through Week 16, total exports are now tracking 17% higher year-over-year. This bullish push was certainly helped for last week’s market-year-high of 105,500 MT of barley shipped out of Canadian ports. 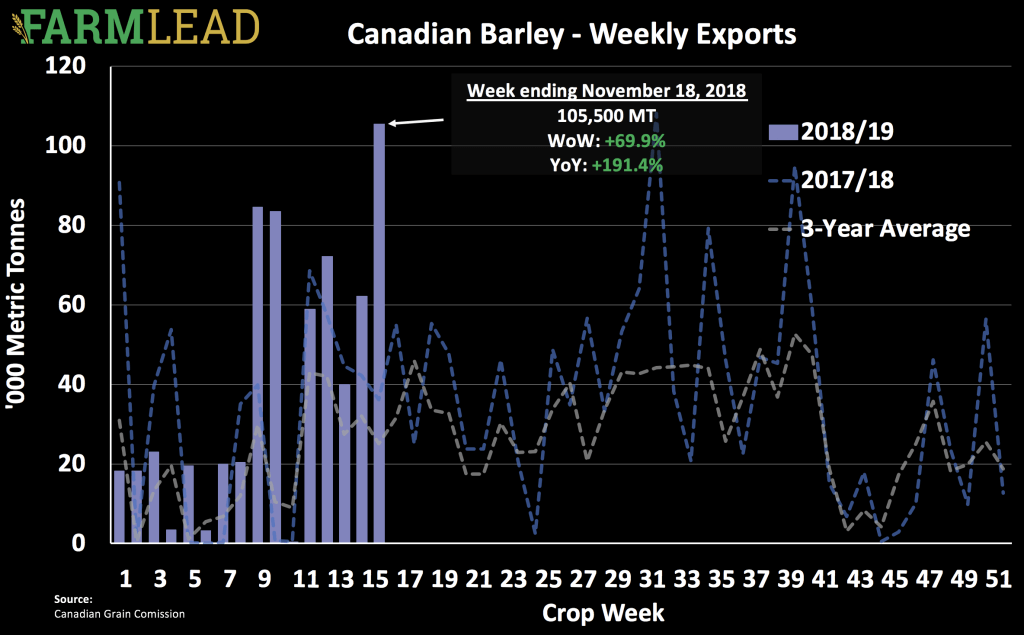 At that sort of level, it’s very likely that substitution effects will start to take over and extremely cheap corn will start to move into these markets. One example of this already happening is in Europe where EU corn exports are sitting at 6.6 MMT through November 11th, up 24% year-over-year. On the futures board this week, corn prices lost about 1.5%, with the March 2019 contract closing just over $3.70 USD / bushel.

Very clearly, the theme of the last few months of grain trade has been a musical chairs of trade flow and that’s unlikely to slow. With some higher domestic prices for the likes of barley, oats, and CPS wheat, it’s not hard to fathom a Plant 2019 campaign that features higher acres of all these 3 markets. This should be important to think about heading into the winter months

A Joyous January — This Week in the Grain Markets

Scare Tactics — This Week in the Grain Markets

Fertilizer Canada has released details of a report, compiled by Meyers Norris Penny (MNP), that aims to outline the significant impact a regulated reduction in nitrogen fertilizer use would have on farmers' bottom lines. The Government of Canada has announced an "aspirational" goal of 30 per cent absolute emissions reduction target for on-farm fertilizer use…