At one point in the fall of 2017 soybeans looked like the crop to grow in 2018, as it was going to be the first year ever that soybean acres would be higher than corn and demand was strong. Since the U.S. put its trade agenda with China into action, soybean future prices have really felt the burn, trending ever lower.

Friday is the July 6th deadline for the increased tariff escalation between the U.S. and China that will greatly impact commodities leaving the U.S. for China. If a deal between the two countries is not reached, it will also increase if the U.S. follows through on its threat to retaliate with an additional $200 billion in tariffs on Chinese imports.

On RealAg Radio Tuesday, Brian Comeault of Cargill states that, “Regardless of what happens this week between China and the U.S., it will add some certainty back into the market so that traders have a way forward — positive or negative.”

The soybean cash chart below shows Tuesday’s close relative to the past ten years. 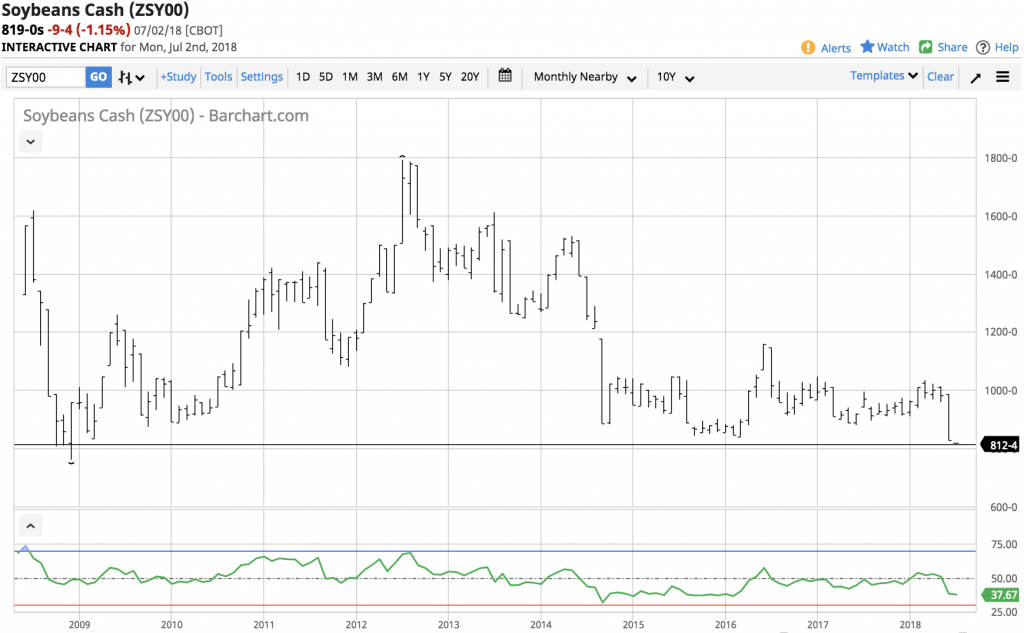 The price slip in corn has not been as high profile as soybeans but the the impact is still real. December corn futures are down 11.64% over the past three months closing at 3.64 (-1/4%) on Tuesday.

Comeault feels that “Corn has taken some damage as a result of the uncertainty in the general market but there are fundamental concerns as well like the general lack of a weather scare and good crop condition scores in the U.S.”

Wheat was a brighter spot in the grains on Tuesday across all classes.

Comeault feels that there is “a lack of bearish fuel to push that market lower but yields in the U.S. are higher than expected, which is typical in a drought.” He continued, “the supply in the Black Sea has been a cap on the wheat market over the past months but the competitiveness of our supply is improving with prices at these levels.”

December spring wheat closed on Tuesday at 552 (-2/3%) and is down 11.35% over the past three months which is almost identical to the fall in corn over the same time period.

Listen to Shaun Haney talk to Brian Comeault of Cargill discuss all of the major commodities on Tuesday’s RealAg Radio.

June WASDE and weather boosts — this week in the grain markets

Wrapping up July — This Week in the Grain Market