As the U.S. attempts to fix its trade grievances with China, farmers watching a falling commodity market are having their patience tested.

U.S President Donald Trump’s biggest grievance is the trade imbalance that the U.S. has with China.  As you can see below, in 2017 the U.S. exported US$129.9 billion in goods to China while China exported US$505.5 billion to the U.S. This is the trade deficit that the president continues to refer to, although a high majority of economists see little reason to be concerned based on the fact that the U.S. runs a structural budget. 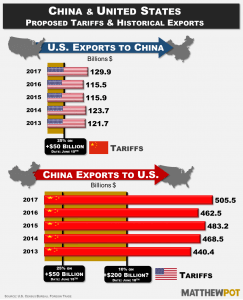 When you look closer at the global soybean trade a couple points become very clear. In terms of exports, Brazil and the U.S. make up 83% of the volume.  When you look at the destination for those soybeans, China imports 65% of global exports. The next biggest purchaser is the EU at 9%. This really does show why U.S. soybean growers are so concerned about their Chinese exports and losing more ground to Brazil.

When you look closer at the overall U.S. agricultural exports to China, it is clear that soybeans and pork look at China so importantly. Other commodities like beef and dairy are continually attempting to expand their exports to China due to its growing middle class and buying power.  As you can see the potential 25% tariff on U.S. exports will create friction for American goods getting into the country. 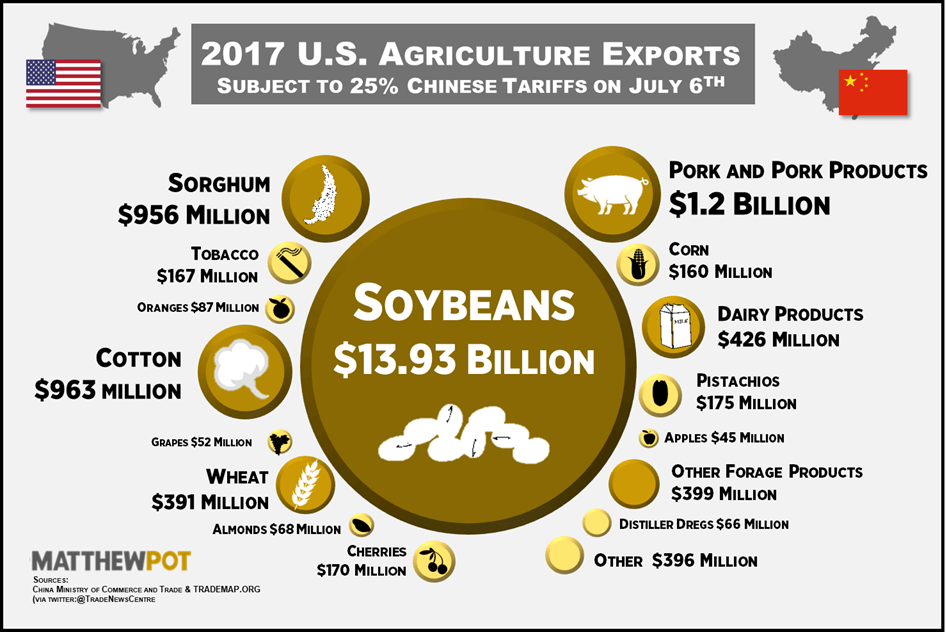 Back at home in Canada, the Hamilton soybean basis is positive which provides Canadian growers with some nice returns in comparison tho their U.S. peers. With the Canadian dollar floating close to $0.75, Canadian growers have been somewhat protected from the sever price drop of the futures.

There are currently rumours circulating out of Washington that the US and China are going to negotiate a truce on soybeans and omit them from the 25% tariff but the market seemed to be hesitant to believe those discussions since soybeans finished down 5-1/2 to 6 -1/4 in all 2018 contracts.

Watch Shaun Haney and Matt Pot talk about the U.S.- China trade situation and the above infographics in this short video discussion. Find out more about Matthew Pot’s daily market commentary at GrainPerspectives.com

Production Comas — This Week in the Grain Markets

Chinese-owned Canada Royal Milk (CRM), based at Kingston, Ont., says it has established long-term partnerships with Ontario Goat Dairy Cooperative (ODGC) and Producteurs de lait de chèvre du Québec (PLCQ) who represent over 120 goat dairy farms between them. When the baby formula plant was first announced in 2017 by Feihe International, the plant was originally being…