Soybean growers in Western Canada have not yet had to face a soil-borne pest that has hurt yields in other soybean growing regions, but it’s only a matter of time.

Soybean cyst nematode (SCN) has steadily spread north along the Red River and has been found in soils on at least two farms near the Canada-U.S. border in North Dakota.

“Is it here and we don’t know about it? That’s a possibility, but we’ve had a decent effort to look for it,” says Mario Tenuta of the University of Manitoba, who leads SCN survey and testing efforts with funding from the Manitoba Pulse & Soybean Growers and the Western Grains Research Foundation.

Since it’s a matter of when, not if, SCN will be found in a Manitoba field, growers and agronomists should prepare for its arrival. Tenuta says they’re hoping to ramp up diagnostic training and awareness in the meantime.

“Look for stunted plants, canopies that close later than they should be, yellowing chlorosis — those are some of the key things. Look for patches, some of these patches can be sandier spots, in some cases they might be depressional spots,” he explains in this Soybean School video, noting SCN damage often goes undiagnosed and misdiagnosed. Fusarium and sudden death syndrome are sometimes associated with SCN systems, as well. 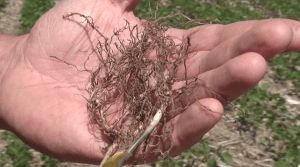 He suggests taking a shovel along when scouting soybean fields in mid to late July, and gently lifting out the root system before placing the roots in a bucket to gently wash off the soil: “You’ll be looking for little small, whitish objects (cysts) on the root system, not to be confused with nodules, which are much bigger.”

SCN is not a regulated pest, so fields will not be quarantined, but there will be additional surveying and testing to understand SCN levels and distribution when it is found, notes Tenuta. Soil sampling for SCN will likely become more common, similar to testing for clubroot disease.

Depending on disease levels, “we’ll probably also talk to them about rotations, about using resistant varieties, and about biosecurity to limit the movement of the nematode off the field,” he says.

Check out the Soybean School video below for more on preparing for SCN’s arrival north of the 49th parallel on the prairies:

Spring fertilizer application pace behind normal — could a rush cause a logistics pinch?

With harvest well underway, or even finished for some, markets continue to be susceptible to global events, but focus is now turning to what the actual yield numbers are as crops come off. Weighing in on the topic is Brian Voth, president of intetlliFARM, and he says he's skeptical of the demand that is being…