Ontario will set a new corn yield record in 2017 with the crop expected to hit an average of 180 bu/ac or better.

Where is all that yield coming from?

A long-time University of Guelph professor who recently worked for Monsanto, he has completed a meta-analysis of U.S. Corn Belt yield from 1984 to 2013. He shared the results with farmers attending the Southwest Agricultural Conference in Ridgetown, Ontario this week. 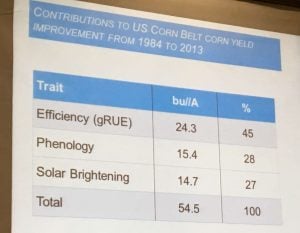 In this episode of Real Agriculture Corn School, Tollenaar says his findings are highly relatable to Ontario and provide strong insight into yield growth in the province.

Tollenaar explains that U.S. average yield has increased more than 54 bu/ac over the 30-year period. He estimates that about 27 percent of yield improvement, or 14.7 bu/ac, is linked to solar brightening, or increased incidence of solar radiation. About 28 percent of the yield trend, 15.4 bu/ac, can be attributed to the increased duration of grain filling period; and a whopping 45 percent, 24.3 bu/ac, is linked to genetic and management effects on the efficiency of corn to convert solar radiation into grain. Here, Tollenaar uses the term ‘grain radiation use efficiency’ which includes better late-season plant health and nitrogen availability.

Where will corn yields be in 2050? In the interview, Tollenaar suggests that all depends on two unknowns – the impact of climate change and industry’s willingness to continue to invest in technology development.

A chunk of change for changes in Canadian agriculture — will you apply?

Farm in Ontario? Fill Out This Pesticide Use Survey, Please