With 1.38 billion people and a growing economy, it’s impossible to ignore the opportunity in exporting to China. But the opportunity is not without obstacles, with concerns about the communist country’s process for regulatory approval, human rights, and lack of accountability in protecting intellectual property rights. 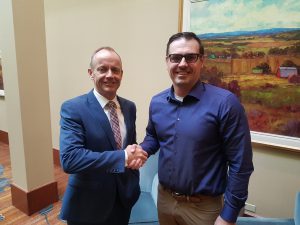 The Hon. Stockwell Day was Canada’s Minister of International Trade from 2008 to 2010. He was also Minister Responsible for the Asia Pacific Gateway and is frequent visitor to China, an advisor on Canada-China issues and currently vice-chair of the Canada-China Business Council board of directors. Day was a keynote speakers at the GrowCanada conference in Calgary this week, sharing his perspectives on China, and what he believes Canadian agriculture must do to take advantage of the tremendous promise China holds.

You can hear the entire discussion by listening to the Nov 29th episode of RealAg Radio (conversation with Stockwell Day begins at the 40 min mark.)

Below is a summary of the discussion.

Why is trade with China so attractive for Canadian agriculture?

Stockwell Day: “China has been the most amazing economic growth story globally in modern history… it is utterly staggering in the last 10-15 years. The opportunities are huge for Canada and Canadian agriculture.”

Should we pursue free trade with China?

“Definitely should. Other countries are lined up with China, and getting opportunities that are great for mutual prosperity. I’m hoping, even at the political level, we don’t see this as a partisan or political issue. I encourage the Prime Minister to be doing this….Why would you not want to be engaged with a billion people who happen to like Canada?”

What about intellectual property and human rights concerns?

“Good concerns and valid concerns. That’s why it’s even more important that we have structured agreements with them…an agreement that causes both sides to sign on to agreed principles on how you do business…We need ways to hold each other to account, including when China talks to us about human rights, there are issues they will raise. We do that in a constructive way.

“If we struck off the list every country that we deal with now that also has internal problems, it would be a very small group that we would be dealing with.”

Have shaky NAFTA negotiations given us new motive to diversify the Canadian trade portfolio?

“In some ways, we are the envy of the world, that we are attached to the hip to the largest economy in the world… it opens a nation that is in terms of population three or four times the size of the U.S. with consumers looking to buy what we have. Some of the adversity on trade with the U.S. is actually a motivator for us to look to Asia.”

Does Canada have a favourable position with China?

There is a mutual respect between our two countries, says Day. “It goes beyond business. There’s such a a large Chinese-Canadian population that has grown in Canada for 150 years. There are many natural alliances that are built on family and trade of education programs. If we look back we were allied with China as far back as the Second World War. We have many historical alliances already in place.”

Is China really concerned about the environment?

“Overall, the political direction in China, the economic and technological direction, is clearly to want to be more green…They are concerned about pollution levels in a city like Beijing. They really want to reduce the problems they have environmentally…That’s why we’re seeing tremendous opportunity for green tech companies in Canada. Their concern is real. They admit very clearly on the energy side that over 50 percent of all their energy comes from coal. They want to move away from that…that’s why I’m encouraging our political leaders to be more constructive on things like approving natural gas, which is a far better alternative for China… China wants to move ahead. We have the opportunity to help them do that.”

The huge Ontario budget: what’s in it for agriculture

Why The Conservative Majority is Not Good For Ontario Agriculture

The Tillage Radish has piqued the interest of both eastern and western farmers. While cover crops are far more common in the east, western Canadian farmers are warming up to the usefulness of oilseed radish and the Tillage Radish. It's a versatile crop — the Tillage Radish creates massive roots that can break up hardpan,…