Some of the highlights from Friday’s data: 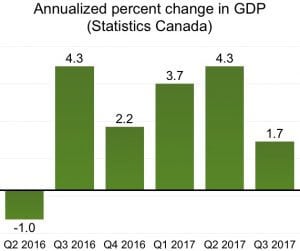 The big question for Gervais and other economists is ‘how does all of this impact the Canadian dollar and interest rates in 2018?’

In regards to what would convince Gervais that the economy is on the correct path, Gervais said, “If you look at the job numbers for the year, the full time job number is doing well. If we start to see business investment growth increase, that would be a great indication we are on the path of strong economic growth and possibly higher interest rates.”

With Canada looking to diversify its trade in the European Union and Asia, while securing NAFTA, bringing the GDP up through export expansion will be a focus in the fourth quarter and into 2018.

The Economy and Your Farm

Is the Canadian Recession Over & How Does Canada Combat a Par Dollar? – Glen Hodgson, Conference Board of Canada

Have you locked in interest rates?