Substance dependency is often reported as — and thought of as — an urban issue. Statistics blur the issue, showing high numbers of dependency, and, sadly, death, in areas of greater population. But addiction is not isolated to people who live in cities.

From alcohol to tobacco to what we’ll focus on in this post, opioids, rural Canadians are suffering alongside our urban counterparts.

In this article: What are opioids? | Severity of the crisis | Challenges for rural areas
What can we do | Resources

Opioids are a group of drugs used to relieve pain, including forms like codeine, oxycodene and fentanyl. Fentanyl, perhaps one of the most well-known, is a strong, odourless, tasteless synthetic narcotic. According to a document published by the Alberta Government, it is roughly 50 to 100 times more potent than morphine, and is prescribed to control severe pain — it takes only three or four grains to kill an average adult. An analogue of the drug, carfentanil, by the same document, is roughly 10,000 times more potent than morphine — one grain can kill an adult.

The illicit market is currently seeing fentanyl imported in small packages, then mixed with other drugs, and sold for an unbelievable profit.

Until this year (with the Royal Assent of Bill C-37 in May), international mail weighing less than 30g could not be opened without permission of receiver, allowing the illicit trade to take off. The bill amended the Controlled Drugs and Substances Act and Canadian Border Services Agency officers (under reasonable grounds) may now open that mail.

Severity of the crisis 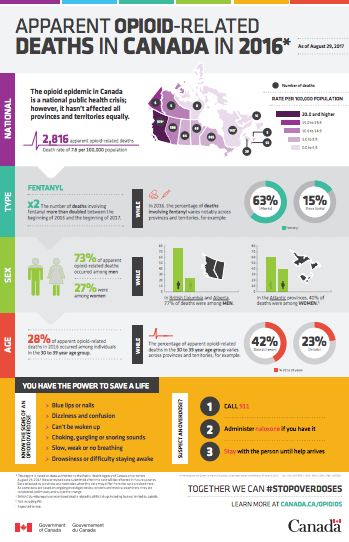 In British Columbia, from January through August 2017, there were 823 illicit drug overdose deaths with fentanyl detected, a 151 percent increase over the same period in 2016.

According to Alberta Health, through the first and second quarters of 2017, 241 individuals in the province died from an apparent drug overdose related to fentanyl. In the second quarter, 81 percent of the (119) deaths occurred in larger urban cities*. By contrast, in the first quarter, 67 percent of  (33) deaths relating to an opioid other than fentanyl occurred in larger urban cities.

There has been increasing pressure on the Canadian government (particularly by the NDPs) to follow the United States’ lead in declaring the opioid crisis a national public health emergency. So far, states of emergency and/or public health crises related to opioids in this country have been declared by:

The statistics around rural demographics and opioid dependency are not easy to come by in Canada, but it is an issue here as well as in the U.S.

According to one study, nearly two million U.S. residents either abused or were dependent on prescription opioids in 2014, with higher rates of related deaths recorded in rural areas. In addition, preliminary results showed that during the study period (2014-17), rural prescribing rates for opioids were approximately 53 percent higher overall in rural areas, and 1.5 times higher for adults in those areas.

A new survey in the U.S. sponsored by the American Farm Bureau Federation (AFBF) and National Farmers Union (NFU) shows that under half of rural Americans say they’ve been directly impacted by opioid use, while an astounding 74 percent of farmers and farm workers say the same.

74% of farmers and farm workers in the U.S. say
they have been directly impacted by opioid use.

“These responses demonstrate the reach of the unrelenting and deadly crisis that is gripping farm families across the country,” said NFU president Roger Johnson. “Farm and rural communities currently face major challenges in the fight against addiction, like access to services, treatment and support.”

One in three rural adults say there is a great deal of stigma associated with opioid abuse in their local community (31 percent), and that the stigma of abuse and addiction contributes a great deal to the opioid crisis (32 percent). – AFBF press release.

The Centers for Disease Control and Prevention actually lists living in rural areas as a risk factor for prescription opioid abuse and overdose, alongside being low income, having mental illness or a history of other substance abuse, obtaining overlapping prescriptions, and taking high doses of the painkiller.

People who live in rural areas and are opioid dependent may have limited access to treatment facilities and programs. In addition, it can be difficult to overcome the fear of stigma in small towns. In many cases, counsellors or hospital staff are relatives, friends or acquaintances. Even beyond that, going into a facility to seek help may be incredibly difficult — what if someone sees my vehicle parked there? or what if they see me walk in? will they start to guess?

And, as with urban areas, an individual may fear legal prosecution if they seek emergency services during an overdose. However, the Good Samaritan Drug Overdose Act, which became federal law in May of this year, can protect the individual, and anyone else present at the time of an overdose, if they call 9-1-1.

What we can do

It can be hard to know in any crisis, what we can do to help. A list of a few actions we can all consider taking in an effort to make a difference in the opioid crisis:

“We’ve known for some time that opioid addiction is a serious problem in farm country, but numbers like these are heartbreaking. Opioids have been too easy to come by and too easy to become addicted to. That’s why we are urging everyone we know to talk to their friends, family, co-workers – anyone at all they know or suspect needs help. And because opioid addiction is a disease, it’s up to all of us to help people who suffer from it and help them find the treatment they need. Government cannot and will not fix this on its own. Rural communities are strong. The strengths of our towns can overcome this crisis.” – AFBF president Zippy Duvall

Celebrating Lost Loved Ones to the Opioid Epidemic

Managing through the winter months and knowing mental health indicators — a LIVE! with Lesley Kelly