Editor’s note: This is a guest market column by Dwight Nichol, DLN AgVentures.

StatsCan released their July 31st Ending Stocks report for the 2016-17 crop year on Wednesday. This was the third week with new Canadian revisions, and other than minor changes, should finalize crop year 2016-17 Supply and Demand balance.

This stocks release is always a snoozer because we have tools to track demand throughout the crop year and both production and ending stocks have been heavily foreshadowed in previous two reports in the last two weeks. There can be surprise revisions, but they aren’t likely. Don’t bet on this release impacting bids at all, but for someone like myself who focuses strategy on Canadian fundamentals I still need to work through the entire report line by line.

After completing this exercise I can confirm there aren’t any market movers hidden here. All revisions were small and largely expected or are confirmation of earlier releases.

The only number that caught my attention was durum.

You probably remember StatsCan’s (farmers’) pessimistic 28.1 bu/acre 2017 yield from last week. This isn’t as outrageous as that number, but it is one I will be keeping my eye on throughout the next crop year. StatsCan pegged 2016 animal feed, seed, and waste at 1.9 million mt. That may seem fine to casual observers due to the poor quality of last year’s crop and the persistence of movement of high vomi durum (at $3-3.50bu). Even the total domestic use at 2.28 million mt can be glazed over in an extremely poor quality year. However, these data points are more than 5x previous high for feed, seed, and waste and 3x higher than the previous high for domestic use. Other than the lack of precedents even close to this number, I also question what or who ate the feed?

This number is out of line by about 1.5 million mt.

That feeds a lot of cattle, hogs or chickens. And isn’t fusarium or vomitoxin supposed to be poisonous in feed and need to be extremely limited in rations? Also; IF Durum was cheap enough to be gobbled up as feed, why is there no corresponding reduction in feed use for barley, oats, or wheat? Last I checked, the Canadian cattle herd did not see significant expansion, so who ate all the durum? Too many question marks for my liking.

Please don’t get me wrong here, this is a good number for sellers. I hope it means that there is a bigger market out there for high vomi durum and that cleaners/users were successful in reducing levels and making use of the grain. What worries me is that the durum didn’t simply vanish. To put it in context, 1.5 million tonnes would fill your largest local elevator four times. It would be quite a magic trick to make that disappear! It seems obvious things didn’t add up and StatsCan needed a place to make an adjustment and for the second time in a few weeks they used the feed, seed, and waste category (see August AAFC canola data). Therefore I think one of two things happened.

In any case it would be unusual to see this data point change dramatically, so let’s not beat this too badly. What I will be cautious about, and aware of, over the upcoming marketing year is that there is a good chance there is more very poor quality durum out there somewhere than numbers indicate. Hopefully if, or when, these supplies are rediscovered, it happens in a slow blend. Pun intended.

Here is your updated S&D table including all recent revisions and my own yield estimate of 36.5bpa for 2017. The balance looks to remain tight. Lower ending stocks than the previous year should be supportive. 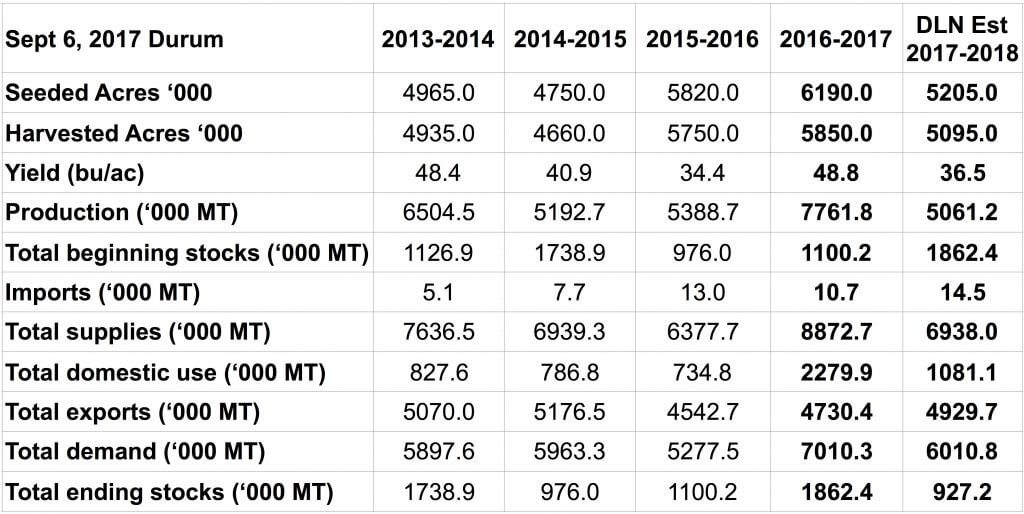 Wheat prices jump into August — This week in the grain markets

Where’s your confidence? — This Week in the Grain Market

Each week, host Peter ‘Wheat Pete’ Johnson answers your top agronomy questions in this dynamic podcast. While Johnson does love wheat, he answers questions on soil health, cover crops, corn and soybean planting, fertility management, herbicide options, and much, much more. Have a question? Leave him a message at 1-888-746-3311, send him a tweet @wheatpete…