With these sort of bearish numbers, the market immediately dropped before rebounding a bit over the subsequent days. My guess is that the market continues to not believe this, hence the recoil. Most are expecting the USDA to revise yields lower in the October or January WASDE reports. 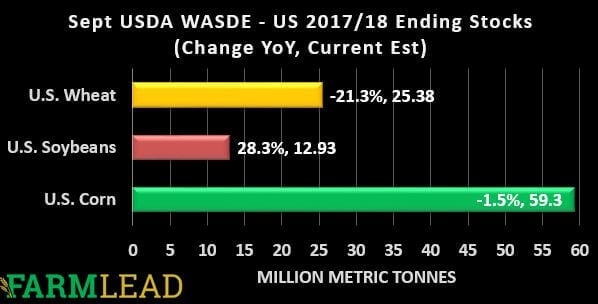 Internationally, Argentina’s crop was raised by 2 million to 42 million tonnes. The USDA is trying to factor in more corn getting planted in the South American nation this year, but the country is facing some excess moisture issues. According to farm group Carbap, 28% of Argentina’s largest-producing province, Buenos Aires, is dealing with above-average moisture. This equates to almost 12 million acres.

This week we got news that China is planning to increase its ethanol production, with a focus for things starting up in 2020. Can it push prices higher? Or will it just be a way for China to clear out its older stocks? Ultimately, I think we need to remember three things:

On the soybean side, Brazil and Argentina continue to compete well with American sales. New crop sales on this side of the equator continues to sag as South American old crop sales are extending into early autumn. 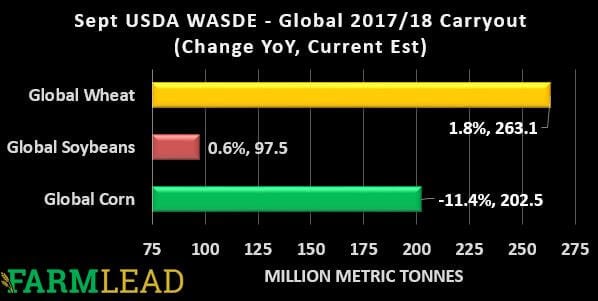 For America, the USDA raised U.S. soybeans exports for the 2016/17 crop year to 59.1 million tonnes, up 545,000 MT from the previous estimate. For the 2017/18 crop year, the USDA raised the American soybeans exports forecast by 680,000 MT to a new record of 61.2 million tonnes. With the higher yields, this puts total US soybean production at 4.43 billion bushels. That beats last year record output in America. From a carryout standpoint, because of the higher 2016/17 exports, the 2017/18 year starts with 25 million less bushels.

However, the bigger production number kept US carryout for the 2017/18 year at 475 million bushels. The market was expecting 442 million bushels. Combining back to yields, it’s worth noting that while average pod counts are lower, the USDA is suggesting that the weights of the pods are the heaviest ever. And by a longshot. Seems like the USDA is really working the excel spreadsheet to make the numbers dance.

On the canola front, the USDA raised the 2016/17 Canadian crop to 19.6 million tonnes but lowered their number for the 2017/18 crop to 19.9 million tonnes. This latter number is still literally 1.7 million tonnes above StatsCan estimates. Perhaps the USDA is just accounting for the fact that StatsCan has an abysmal record of revising their canola production numbers higher? Regardless, 2017/18 Canadian canola carryout is pegged at 1.1 million tonnes.

Is there a chance this number goes below 1 million this year? I think it can but it won’t be done until this time a year from now when the market is already looking to the 2018/19 crop.

On wheat, the USDA raised U.S. spring wheat by 15 million bushels on less exports and domestic use. Total 2017/18 carryout for US hard red spring wheat is now pegged at 146 million bushels (or slightly less than 4 million tonnes if you’re using GrainUnitConverter.com) For durum, US ending stocks for 2017/18 were also raised by 2 million bushels to a total of 24 million bushels (or 653,000 MT). The reason for the increase was imports were raised. The only logical place those imports are coming from is Canada. If you’re planning to take advantage of it, again I recommend you get your wheat tested for U.S. grades as well.

Overall, sure there’s a lot of wheat out there in the world but not necessarily a bunch of the highest quality. We think that there are some better opportunities to price out wheat down the road, but this will include protein and other quality premiums. We continue to recommend that farmers order their independent grain tests from GrainTests.com. As such, while posted prices may not be great, we expect them to improve, especially when you start to consider quality premiums.

Adjusting to August prices (again) — This week in the grain markets

Weather complicates harvest estimates – This week in the grain markets