Italy’s government says it is moving ahead with a plan to implement mandatory country of origin labeling requirements on pasta, potentially impacting the competitiveness of Canadian durum wheat in one of its largest markets.

The Italian government notified the European Commission about its intentions this week, according to the country’s agriculture minister, Maurizio Martina. (As of May 11, Canada had yet to receive confirmation from the EU.)

Italy previously published draft regulations that would require all pasta sold and processed in Italy include a label indicating where the durum originated and where the processing into semolina occurred. 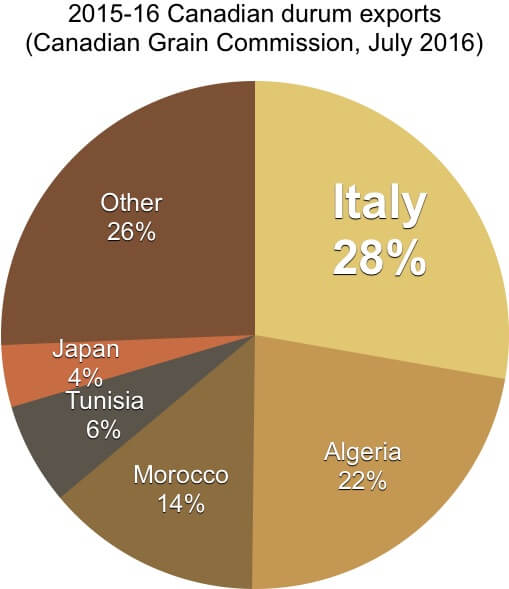 Formal notification would start a 90-day timeline for Brussels to rule on whether the labeling rules comply with EU laws.

“I’ll be blunt. It’s my view it does not, but we can’t really take any official action until that notification occurs,” said Cam Dahl, president of Cereals Canada, last month.

Italy was the single largest export market for Canadian durum in 2015-16, importing around 1.2 million tonnes, according to Canadian Grain Commission data.

“We are working closely with Canadian industry to assess the situation and the potential impact of this measure,” said Agriculture Minister Lawrence MacAulay in a statement sent to RealAgriculture.

“We are also in contact with members of the European Commission, to express our concerns and support the interests of our industry,” the minister continued. “I have recently raised this issue with my counterpart from the European Union. We always advocate for strong science-based trade and will continue to do so.”

Read/hear more on this durum COOL issue and what it could mean for Canadian durum exports, here:

Editor’s note: updated on Thursday, May 11 with comments from the federal agriculture minister.

Al Mussell – Does Canada Need to Dismantle Supply Management in the TPP?