Grains ended the month of September on higher note as more weather premiums got priced into the market with the inclement rains slowing Harvest 2016. For the week, grains ended relatively unchanged but, as we come to the end of the quarter, things are much lower (see associated chart). The majority of grains are below where they were a year ago, but that’s because the market continues to lie in a price coma after it’s been ingesting too much for its own good.

Recent analysis by Allendale Brokers suggests that the lows of the corn and soybeans market may not be in yet. More specifically, in the past 25 years, new record corn yields were seen 6 times and 4 of those years, the lows of the corn market weren’t seen until October – December (recent buzz that China has given corn export licenses for up to 2 million tonnes may push lows out further though). It’s a similar story for soybeans as, record yields were seen in 9 of the past 25 years, with 6 of those 9 years seeing the Fall/Autumn low sometime in October or November. 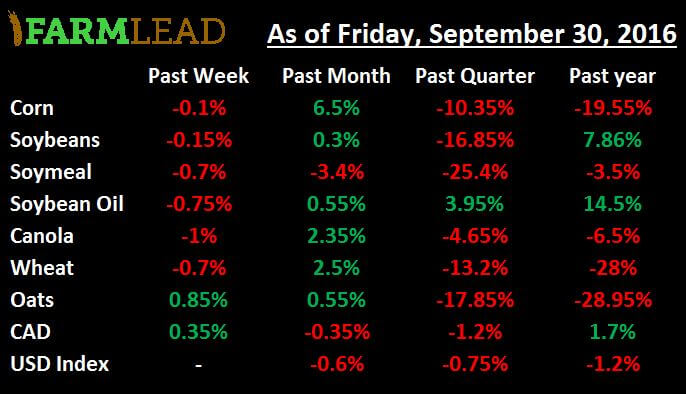 Also affecting grain markets towards the end of the month was O.P.E.C. agreeing to cap it’s oil production, signifying a move back towards more market managed inventories. However, the oil bears still believe that the market is way oversupplied and that the market will soon correct itself once it realizes there’s still lots of oil in storage and even more being produced (i.e. Russia is expected to produce a record 11.1 million barrels a day in September, up 400,000 from August).

Speaking of Russia, it’s suggested that up to 115 million tonnes of grain will be taken off this year there, but sales have slowed recently with just 9 million tonnes of wheat shipped out from July-September, mainly thanks to the hiccups that Egypt’s ergot policy has created for trade. Further slowing sales has been export prices for Russian wheat falling to their lowest level in the past six years (currently $172 USD / MT FOB Black Sea port or the equivalent of about $6.05 CAD / bushel), leading to farmers holding onto their grain versus selling it.

However, with Egypt finally reverting its ergot policy back to a 0.05% tolerance, expectations are that Russia’s wheat exports could jump to 4.5 million tonnes in October. This comes as Eastern European farmers are looking to finish up their fall seeding for the 2017/18 crop. A weak Russian Ruble is encouraging farmers there to plant more winter wheat as they continue to export the cereal freely. Winter grains acres are expected to be up 6% year-over-year in Russia to 42.9 million acres, but only 25.5 million of those have been planted thus far.

A weaker Hryvnia is leading to more acres in Ukraine as well, but there are some differing opinions on the soil moisture profile in Eastern Europe. Specifically, the European Commission says that with the drier summer that the Eastern European areas had, there are concerns that drier soil moisture conditions may deflate some of these winter grain prospects. However, SovEcon states that there is shortage of soil moisture and that it is even a little too wet in some southern regions.

Switching continents, it’s not the moisture that’s an issue in Australia, but colder temperatures that are proving to be a bigger threat to the wheat crop in the Land Down Undaa. Specifically, temperatures are touching as low as -4 degree Celsius in the Western half of the country while rains are most damaging in the east. As such, not only is there the possibility of something less than a record wheat crop but also memories of 2010 are coming back when late rains caused a lot of poor quality.

On that note, these same rains could have a negative effect on the pulses crop, mainly chickpeas. At least 1 million tonnes of the hummus ingredient will get harvested in the Land Down Undaa (although some have pegged the crop as big as 1.5 million tonnes), which would put significant pressure on both chickpea and yellow pea prices. Add in about 365,000 tonnes of red lentils and 300,000 MT of peas and it could be a big year for Aussie pulse growers. As such, we’ve seen prices start to stabilize on peas and lentils but chickpeas have felt some weakness, albeit the current levels are still worth locking some profit in on. 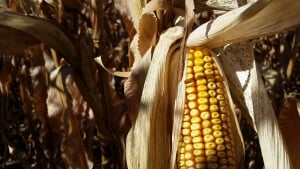 Finally, the U.S.D.A. came out with their updated numbers for the final carryout of the 2015/16 crop year on Friday, September 30th. The big question that many market participants have been asking themselves is how much demand have these lower grain prices bought. For corn, things appear to be improving as a record amount of corn was taken off the balance sheet for the 4th quarter, putting U.S. ending stocks at 1.74 Billion bushels (627 million bushels, or 36% of which, is still held on farm, a jump of 6% year-over-year).

For soybeans, the U.S.D.A. says that 197 million bushels of the oilseed are available in America (+3% year-over-year, below pre-report guesstimates, mainly thanks to a 4th quarter usage that, like corn, was also a record. Helping push the ending stocks lower though was a revision to the 2015 harvest production number. Total U.S. wheat inventories to end the 2015/16 crop year came in at 2.53 billion bushels, 133 million bushels above what the market was expecting and a 21% increase year-over-year.

Overall, we ended the month of September in a better position that where we started it on the price front. We’ve also gotten closer to getting the 2016/17 crop in the bin here in North America but there’s still a fair amount of work to get in. Rains have continued to slow progress and no one likes the stop and go nature of things but it’s gotta get done. As we head into the month of October and the last calendar quarter of the year, taking all of our production off may last until after Canadian Thanksgiving weekend, meaning the turkey coma may have to wait.

Targeted trade, parallel paths, and a look at China — a LIVE! with Carlo Dade and Sharon Zhengyang Sun

The Markets This Week — Weather and Oil

The “BinKnocker” — A Simple Innovation to Check Your Grain Bin Level

Innovation doesn't have to be high-tech or complicated, as Ron Gramlich of Bashaw, Alta., will attest. Tired of crawling up bins while working at a fertilizer facility, Gramlich created what he's marketing as the "BinKnocker." "It's simply a hockey puck on a rope, with stainless steel brackets fastened to the outside of the bin," he…