Another growing season month is completed and there’s just about as many questions out there on the crop as there was at the beginning of the season. As usual, volatility ensues and this past week was no different, but mostly to the downside as any charges made by the bulls was quickly put to bed by bears until Friday when the U.S. dollar dropped 1.3%, helping pushing the commodities higher.

The reason for the dramatic U.S. dollar drop was the two-fold. First, the U.S. Federal Reserve said this week that they are not planning on raising interest rates yet, although they continue to “monitor things closely”. The second, and more significant, was that the GDP print for U.S. second quarter growth only showed a tepid 1.2%, well below the pre-report expectation of a 2.6% growth.

While some hotter weather in the forecast the first 2 weeks of August helped soybeans, the change in the US Greenback was the main catalyst for the oilseed to rally 2.5% on Friday for a 2% gain for the week. Canola was able to drag along with beans, but barely, only managing a 0.65% gain for the week whereas corn, oats, and wheat all dropped, down 0.45%, 2.5%, and 3.8% for the week, on continued decent crop conditions in North and bigger forecasted supplies globally.

Case in point, the International Grains Council raised their expectations for the global grains harvest again, calling for a 2.046 billion-tonne crop, only the 2nd time in history the 2 billion-tonne mark has been crossed, the other being the record set 2 years ago with 2.047 Billion tonnes of grain being harvested. The main cause of the upgrade was the corn crop, raised by 14 million tonnes from last month to 1.017 bilion tonnes, which would be a 5% jump from last year’s output, and most of the upgrade attributed to a bigger American crop.

The global wheat crop was upped to 735 million tonnes, thanks to bigger harvests out of the Black Sea and the U.S., while world soybean production was increased to 321 million tonnes (+1.6% year-over-year) with better prospects in America and likely more acres in Brazil. With U.S. soybean crop conditions still rated as 71% in good-to-excellent, there’s about 4 weeks left of weather risk for the that pending monster to felled. 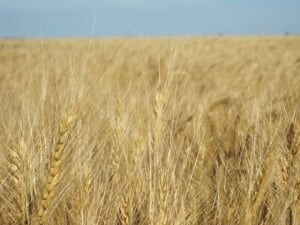 Staying in the U.S., the annual Wheat Quality Council’s spring wheat crop tour through the Dakotas and Minnesota showed a slightly smaller crop than past years. Farmers in these states planted into slightly drier conditions and didn’t necessarily receive the rains they were looking for but it was enough to peg average yields of 45.7 bu/ac, down from last year’s 49.9 and the 5-year average of 46 bu/ac. Conversely, durum wheat yields across the 3 states are expected to fare much better, estimated by crop tourers at 45.4 bu/ac, a 16% jump from last year’s 39.2 bu/ac, and even better than the 5-year average of 38.3 bu/ac.

Overall, the U.S. total wheat crop continues to impress, as do those in the Black Sea and potentially here in Canada as the crop gets closer to coming off. IKAR raised their estimated for the Russian wheat crop for the second time in as many weeks, this time to 69 million tonnes. It’s more than likely that we’ll also see about 2 million tonnes of yellow peas coming off in Russia, with another 1 million supplied by the other Black Sea countries.

Strong pulse crop production in Australia is also weighing on North American prices. However, Aussie farmers are holding back from forward contracting their wheat as what looks to be big harvest in the Land Down Undaa will further add to the gluttony of global wheat supplies. CBH Group, Australia’s largest exporter, is adding additional short-term storage to its locations to accommodate what they expect to be a record crop of more than 16 million tonnes in Western Australia. This aligns well with Rabobank’s call for a total 26.7 million-tonne wheat crop out of the Land Down Undaa.

From an aggregate standpoint, Rabobank is also in the camp that wheat and corn are currently racing to the bottom to see which feedstuff can be the cheapest. The Dutch agrobank has suggested that the U.S. corn carryout at the end of 2016/17 could rise to a 30-year record of 2.3 Billion bushels, meaning Chicago is likely to trade in the bottom half of the $3s per bushel versus returning to $4 handles.

For wheat, there’s going to be a lot going into the feed market this year, as it’s seemingly the cheaper alternative (for now) and livestock margins have gotten a little thinner. Ultimately though, there’s just a lot out there, not just in North America, but globally, and betting the farm on wheat values rallying significantly isn’t a good risk management plan.

Why? Even though there’s some concerns on Argentinian rains slowing planting there and the European wheat crop coming in smaller than originally forecasts (and with some questionable quality), there’s plenty of options. There’s been some buzz that U.S. wheat exports could win back some market share but I have 4 arguments against that: Black Sea, Canada, Australia, and the U.S. Dollar. These are the main competition factors to help the U.S. ag industry work through their multi-decade highs of available supply.

On the weather front, fresh long-term forecasts continue to call for a weaker La Nina starting in late Q3 2016 with things starting to dissipate in Q1 2016. Drew Lerner from World Weather Inc. is expecting more of the wet stuff to for Western Canada in the first week of August and doesn’t expect significant drying until at least the middle of the month.

Overall, the final outcome of North America’s Harvest 2016, in terms of quality and quantity, won’t obviously be known for at least two more months. However, we do know that, given the risk that still remains from getting the crop off, there’s a good chance that prices will stay near current levels until more is known. Translation: only Mother Nature is the real sleeping giant that, at this point, can awaken prices in the short-term between combines starting up and being put back away, but with every day that passes, the chance she wakes up lessens.

Wheat School: What Goes in to Basis (But Why That’s the Wrong Question to Ask)