For the year 2016, the Stanley Cup, the Conn Smythe trophy and the RealAg Playoff Hockey Pool championship banner (when we make it) will all bear the name “Crosby.”

After stacking his team with eight players from the Pittsburgh Penguins and seven from the San Jose Sharks, Rex Gerrard of Southey, Saskatchewan is our winner. His entry “Rex & The Crosby Show” finished atop the standings in RealAg’s 2nd annual playoff hockey contest as Pens captain Sidney Crosby lifted Lord Stanley’s mug on Sunday night.

There are no words. pic.twitter.com/QTyjSLB31x

With 345 points, R&TCS finished seven points up on the second-place “Fargin Iceholes.” “Bluenoser,” “Simcon” and “Simonella” rounded out the top five (find the complete standings here.)

Thanks to everyone in the RealAg community who entered! And a big thanks to Kahntact for partnering with us to host the pool. 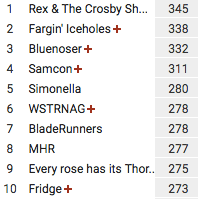 CN ‘ahead of schedule’ recovering from 8-day strike