Believe it or not, the tail end of this growing season is rapidly approaching, and while there aren’t many action items to get done this week in the field, the one that MUST happen is a major one — scouting!

Peter Johnson, RealAgriculture agronomist and host of Wheat Pete’s Word, kicks off this weekly crop report with an in-depth look at a plan of attack for soybean aphids. The answer of whether or not to take action is surprisingly complicated this time of year, Johnson says, as the soybean plant is moving past the window where aphid control is economic.

How is that now? Well, earlier in the season, aphid numbers of 250-plus per plant, with increasing numbers usually signals a green flag to spray, but as soybeans reach growth stage R5 to R5.5 it takes over 1,000 aphids per plant for that spray to pay off, and the reason is all in how soybeans grow and fill pods. Remember, too, that the bigger and more advanced the crop is the more you may lose to trampling, so scout often, but really be sure before you spray.

Need to brush up on your soybean physiology? Here’s a video on all you need to know!

For those who had to replant or planted very late, some soybean crops are not yet at even R5; these fields will be a high priority for scouting this week, Johnson says, and every three days following until the crop is into R5.5. 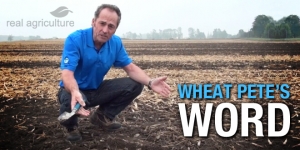 Not to be missed while you’re out scouting, of course, is the corn crop. No, there’s not much you can do right now, but some farmers are reporting more damage than anticipated caused by western bean cutworm. Warm days and foggy mornings also increase the risk of gibberella (fusarium) and leaf disease, like rust and NCLB, are certainly continuing to cause damage. Again, not much to pull the trigger on, but the more you know the better you can plan for harvest and for #plant16.

On to this week’s top questions! Hats off to you, Ontario farmers, as many of you are really interested in cover crop options for late summer/early fall and extending the grazing season. In this week’s word (found below) @WheatPete covers if it’s too late to put down an orchard grass/red clover mix, and when it’s too late to put down oats for forage, including following silage corn.

Not to be neglected, this week we’ve got some serious weed control questions, as farmers are concerned about scentless chamomile in a pea crop and the spread of giant hogweed into crop land from field margins. We learn that giant hogweed is a perennial that only flowers once and then dies, so if you’re only trying to control it when you see it flowering, you’re actually years late. The better plan? You could go in fall AND spring with glyphosate (but you must do both for effective control) or you could use a more selective product, like Truvist or high rates of dicamba, that will leave the surrounding grass alive but should control the weed.

That’s it that’s all for this week! Remember to send in your questions and tell your friends where to find Wheat Pete, here at RealAgriculture.

FAO wants to hear your story on plant health

Field Trials: What to Measure Beyond Yield Response

What happens when 400 innovative farmers, a team of agronomy and extension specialists, and a leading soil compaction researcher descend on an Ontario farm? You get Compaction Action – likely the most ambitious and insightful 'hands-on' farm research day ever attempted in the province. The event, hosted by the Innovative Farmers Association of Ontario (IFAO), featured…