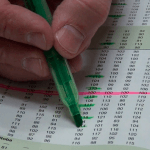 You’re looking at yield data from last year trying to figure out which soybean varieties to grow in 2015 — how do you know when the yield difference between two varieties is meaningful?

“That’s a question we get all the time when it comes to picking varieties and looking at single-year site data,” says Dennis Lange of Manitoba Agriculture in this episode of the Soybean School West (wearing his trademark Hawaiian-style shirt, of course.)

Using the latest Seed Manitoba guide, three highlighter markers and some basic statistics, he explains how to conduct “the highlighter test” to determine the best-suited varieties based on yield potential and maturity.

Lange also describes how iron deficiency chlorosis (IDC) ratings are determined and other factors to consider when picking soybean varieties.

And will the rapid expansion in soybean acres in Western Canada continue in 2015? Stay tuned until the end for a soybean acreage projection for Manitoba this year. (According to Statistics Canada, there were just under 1.3 million soybean acres in 2014.)

Why Early Scouting for Blackleg Matters More Than You Think

Under the Microscope, Ep. 7: What Makes a Vigour Test Different?