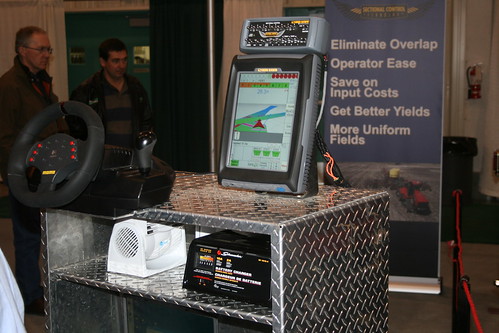 In July I attended the Precision Ag Conference in Springfield, Illinois. I though in my first blog post I would cover my thoughts and observations at the conference.

Last week Brent Nicol and I attended the infoag, precision ag conference in Springfield, Illinois. (www.infoag.org). Not being a seasoned traveller, we drove to Calgary and flew United to Chicago and then to Springfield (about 250km south of Chicago). Severe thunderstorms delayed flights in Chicago and the airport was packed, hot and humid! So after fourteen and half hours of travelling we stumbled into the hotel room and hit the sheets. Luckily the conference didn’t start until 10am and we were able to get some sleep!

As the 10th Infoag conference started, I could tell that these folks had been at this for a while. They opened with the following awards:
1. Educator-Researcher Award
2. Entrepreneur-Advisor Award
3. Farmer Award
4. Legacy Award

So I’m thinking to myself that this is pretty cool and it was obvious to me that in this instance, the US must be way ahead of us than in Western Canada. If we were to run these same awards I could only think of two or three people even involved in precision ag education or research? There are certainly a few more involved in the entrepreneur and advisor area and there is growing number of farmers doing some good work. Legacy Award? Hmmmm.

So why have we been so slow to adopt? Can I assume the reason is that we don’t get the same support for research and extension as that they do in the US? It seemed to me that every State University had a precision ag expert or two at the conference.

Anyway, after the awards and a short political rant on streamlining crop acreage reporting using precision ag, (hear that stats Canada?), the rest of the conference went straight to breakout sessions. Brent and I didn’t see each other until supper and were still not able to catch all the sessions between the two of us! Over the next two days, infoag presented over 40 sessions divided into five subtopics:
-Regional Reports
-Advanced Topics
-Precision Ag 101
-Issues
-Sponsor Showcase

Wow! Ok, I was already a little overwhelmed just trying to decide which sessions I would attend!
I jumped into a session on variable rate seeding. What?! You can do something other than variable rate nitrogen? Dr. Ron Heiniger from North Carolina state taught us the importance of optimising sunlight interception through effective plant population in corn? Ok… I don’t think I’m in Kansas anymore? What a minute? I was actually closer to Kansas than I’ve ever been. Then Tim Smith went on to telling the crowd how they use on farm research to optimizing seeding rates according to soil properties and nutrient releasing capability. Pretty cool stuff!

I then attended a session titled 4R Nutrient Stewardship which wasn’t really anything new. Much of the talk focused on nutrient loading issues and that increasingly the finger is being pointed at agriculture. They mentioned that crop production is the major non-point source pollutant in the gulf of Mexico and that they are currently not regulated. Strong attempt to focus efforts on 4R strategies.

The afternoon kicked of with a dynamic talk from Dr. Paul Fixen of the International Plant Nutrition Institute on the Preparing for Intensification (ie more yield). He outlined the connection between human nutrition, carbon and land and that where all three intersect depends on soil and nutrient management. Intensification can be bad but could be mitigated with improved efficiencies (especially nitrogen). He also commented that there is a strong need for more systematic on farm research trials using precision ag tools.

I was then wowed with a presentation on Precision Irrigation. The technology now exists to vary water application according to soil texture, water holding capacity, soil type, topography, imagery and yield maps. This can be done in 6 degree pie slices or even per tower block. I couldn’t help but think of the potential for this in southern Alberta’s 1.5 million acres of irrigation! Awesome!

That ended the first day of talks and we spent some time exploring the trade show, meeting some people and enjoying a few refreshments! I’ll have to admit that the trade show surprised me a little. I’d guess that 80% of the booths were software and data management related. I mentioned this to Jay Bruggencate of Farmer’s Edge and he said yep, it’s all about the data. Interesting!

Great day and I was pleasantly surprised that there were about 10 people from Alberta at the conference. Got a chance to meet Colin Bergstrom of Seven Island Ag in St.Albert who I had previously only met on twitter! We enjoyed and nice meal at a local watering hole and made it to bed by 1:00am! Not bad. Stay tuned for a recap of day 2!

Ken is the General Manager of SARA. While he manages the all important administrative duties such as getting funding for projects and sending off reports he is also not afraid to hop on the tractor and get his hands dirty once in a while (or pretty much all the time).  Please check out more information from  FarmingSmarter.com