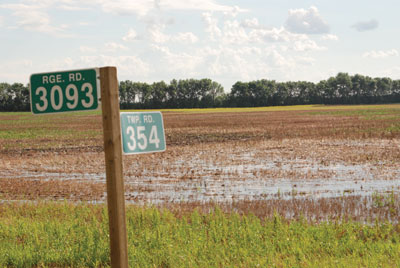 This morning StatsCan released its acreage report as of June 3rd and there is one shocking number that seems incredibly difficult to accept. By predicting 19.7 million acres of canola it would seem that the way that StatsCan collects data is not timely nor is it relevant. After being at the Farm Progress Show last week in Regina it is very clear that the number being floated in the early part of 2011 of 18 – 18.5 million acres will be much more accurate.  I have talked to five different industry people this morning and everyone is saying the same thing, “There is no way that there is 19.7 million acres of canola.”

Before the StatsCan numbers were released, FarmLink Marketing released its acre forecasts and they seem much more relevant and possible. FarmLink is predicting 18.3 million acres which is much more believable.  I talked to several farmers at the show (talking to farmers) that seeded less than half of their intended acres.  Many of them commented to me that what was seeded was in very poor condition and only half of it would be viable.  Thank goodness there is some private analysts to supplement the reports that are coming from government institutions like StatsCan.

Tight Canola Supply an Exception in a World With Record Supplies

Amendments have recently been made to Saskatchewan's Provincial Sales Tax (PST) exemptions which could positively affect farmers. The changes come after the government says they've discovered PST was being inconsistently applied to certain items including farming equipment. "The changes to the PST regulations will be more equitable, consistent and protect farmers against perceived 'PST creep'…